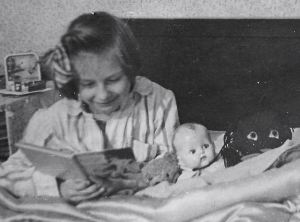 Once a reader, always a reader…

A few days ago I spent a glorious hour in my local bookshop talking about books for the under 7’s with the very knowledgeable Kirsty who is in charge of the children’s section. Over a coffee we looked at some of the most popular and interesting ones in the store and discussed why they were selling (girls love the books about the Fairytale Hairdresser!).

I had to buy Oi Frog by Kes Gray and Jim Field, a hilarious rhyming story about where animals sit. A very simple idea beautifully illustrated which kids of all ages will enjoy. As I said I couldn’t resist it either!

But picture books published several years ago are still selling: Judith Kerr, Martin Waddell, Sam McBratney, Nick Sharratt, Mairi Hedderwick and of course Julia Donaldson by the shelf-load. Roger Hargreaves’ Mr Men and Little Miss series are still popular as are Dr Seuss books and Eric Carle’s The Very Hungry Caterpillar. My copy of it is still on my bookshelf, somewhat battered now after being through the hands of my sons when they were young (which wasn’t exactly yesterday or the day before.)

For the 5-8 year olds, Roald Dahl and Michael Morpurgo are still there on the best-selling lists, now joined by David Walliams and the new children’s laureate, Chris Riddell. He’s also an illustrator which is such an advantage to a children’s writer as his drawings add so much to his wild, imaginative tales.

Kirsty introduced me to some newish writers that I hadn’t come across before like Dundee-based Pamela Butchart who writes about Wigglesworth Primary in a series of very funny, but nearly totally believable tales, and Jonny Duddle, whose name alone is enough to make you want to read his books.

I’ve now begun to try to sketch ideas for a story of my own as it’s been a while since I wrote for young children. When I was writing scripts for the BBC’s schools programmes, stories would regularly arrive in my head, ready to be written up. But my children’s writing muscle has atrophied in the face of competition from article and short story writing so I’ll have to limber it up and get it going again.

Next week, I’m visiting a friend who keeps a pile of books for her young grandchildren. I shall indulge myself in them in the absence of said children and hopefully glean a few more ideas and tips to help my writing on its way.