Another view of the conference from the east coast!

Two Capital Writers, myself (Kate Blackadder) and Anne Stenhouse, along with two other writing friends, ventured out of the capital this past weekend to attend ScotsWrite, a conference put on by the Society of Authors in Scotland. I say ‘ventured’, because although the venue, the Westerwood Hotel near Cumbernauld, is in theory about an hour’s drive away from Edinburgh, it somehow took us three. We passed through villages we’d never heard of before, and we certainly wouldn’t care if we never saw the one-way system round Falkirk Town Centre ever again. Ever again.

We consoled ourselves by accepting that we operate on the creative side of our brains and couldn’t possibly be expected to have a sense of direction as well. Fortunately we arrived in plenty of time for a very nice dinner, followed by the keynote speaker – Joanne Harris, no less – and our lack of wayfinding…

I’m just back from a most exhilarating two-day conference, Scotswrite17, organised by a team from the Society of Authors in Scotland, led by Linda Strachan. 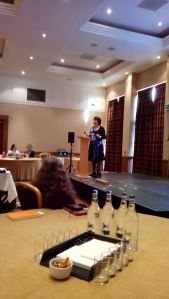 Where do I start? In my best Scots accent, ma heid’s burstin’!

There were keynote speakers, break-out sessions and one-to-one opportunities with commissioning editors and agents as well as Tai Chi, CPR training (in case it was all too much for anyone!) gin tasting and a ceilidh. Mix it all up with over 150 writers from all airts and pairts keen to share their experiences and you have an effervescent, bubbling cauldron that overflowed with opportunities, friendships and fun.

Obviously it was impossible to be at everything but I did my best! Joanne Harris opened the conference after dinner on the Friday with a talk on the magic in and of writing.

Joanne Harris at the book-signing

As a child she was shown a library and told that every writer of those books had ended up penniless. It didn’t stop her though despite feeling that she was an imposter and should get a proper job. As she said, If you suffer from imposter syndrome, that probably means you’re a writer.

Jane Johnson on Saturday morning electrified us with her life story. She had discovered that a story her mother had told her about one of her ancestors being taken by Barbary pirates and sold into the White Slave trade could well have been true. So off she went to Morocco (as you do) to research it for a book. While there, she met a man who fitted her mental picture of a Barbary Pirate. Reader, she married him  – and brought him to the conference, where he enthusiastically joined in the ceilidh. Her advice obviously, was to follow whatever your passion is.

I had one-to-one sessions lined up with an agent and a commissioning editor out of the 8 I had a choice from. Dragon’s Den had nothing on this! Each of the 8 sat in a separate booth and we were given precisely 10 minutes to make our pitches when a bell rang and the next person took our place. Fortunately the CPR training was taking place next door in case of anyone collapsing from the strain of it all.

Jane Johnson, this time with her publishing hat on, led a break-out session where she covered what it is that makes an editor fall in love with a book. She read various examples of manuscripts that had grabbed her attention with unusual imagery, or keeping things up the writer’s proverbial sleeve ready to surprise the reader.

Emily Dodds and Mary Hoffman spoke about writing for children and young adults. Finding your own luck plays a part, Mary Hoffman in being sent to interview Richard Adams and giving him her manuscript, while Emily went on a course run by the Scottish Book Trust on writing for CBeebies. This led to her being asked to write for the TV programme, Nina and the Neurons.

Gin tasting followed (and much appreciated) and the fun continued after dinner with the ceilidh.

To bed, tired but happy and yes, a cliche but brain dead otherwise.

On Sunday we began with a wide-awake and stimulating session from Joanna Penn talking about how to make your living (i.e. a six figure sum from writing). If only she could bottle her energy and sell it along with her books! And how does she do it? As she says, ‘it’s not about you, it’s about the customer.’ In other words, write what sells and what sells is genre fiction; romance, crime, thrillers etc.

Memo to self: get on with it and stop playing computer games, socialising and generally living. 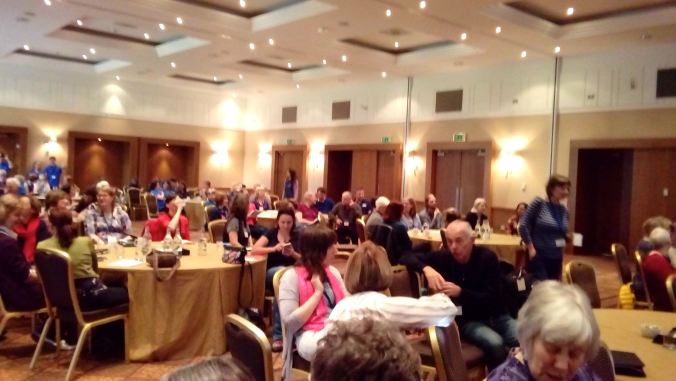 After that, a session on mental health for writers chimed nicely with the Tai Chi, the gin tasting and an informal Fitbit discussion over lunch.

Memo to self: must get one as it jolts you into action if you’ve been sitting too long.

Sally Polson, commissioning editor at Floris Books, took us through the steps in producing a children’s book and what they were looking for. A very valuable session.

Memo to self: write, write and keep writing.

Finally, the last session was a group of speakers from the weekend all giving us their top tips for success. And if we all follow their advice, there will be a lot more very successful writers about.

Meeting lots of fellow writers from all round the world (Canada, Panama and Ghana were represented as well as many from England) was all part of the experience as well as sharing of ideas and tips and laughs and friendship. It was intense, and thought-provoking and very, very enjoyable. I hope they do it again because I’ll be there.

But I’m back and I’ve run out of excuses so I’m about to throw myself back into writing. I missed the first two nights of Ayr Writers’ Club new season (see above for my excuse) and I should be at Michael J Malone’s launch of his latest book, House of Spines, tonight but I’ve run out of steam. (More excuses.) However I’ll catch up with him and his new book later.

I’ve my book of articles on growing up in the West of Scotland after the Second World War to sort out. I’m stuck because there are apparently hidden text boxes in the manuscript and the powers that be at Lulu (the company I use to publish my books) don’t like it. And I don’t know where they are. I left it there when I went away, hoping, ludicrously, that it would have sorted itself out by the time I got back, but of course it hasn’t. So I will have to search all the forums to see if anyone else has had that problem and what they’ve done about it. I also posted a question on Lulu’s help-desk but the reply I got only took me back to the information site I’d already read my way through.

Part of the problem is that I work on Mac Pages and export to Word.

In the meantime, here’s the photo of me I’m going to use on the cover, once I get that far. You’ll see I haven’t changed much over the years. 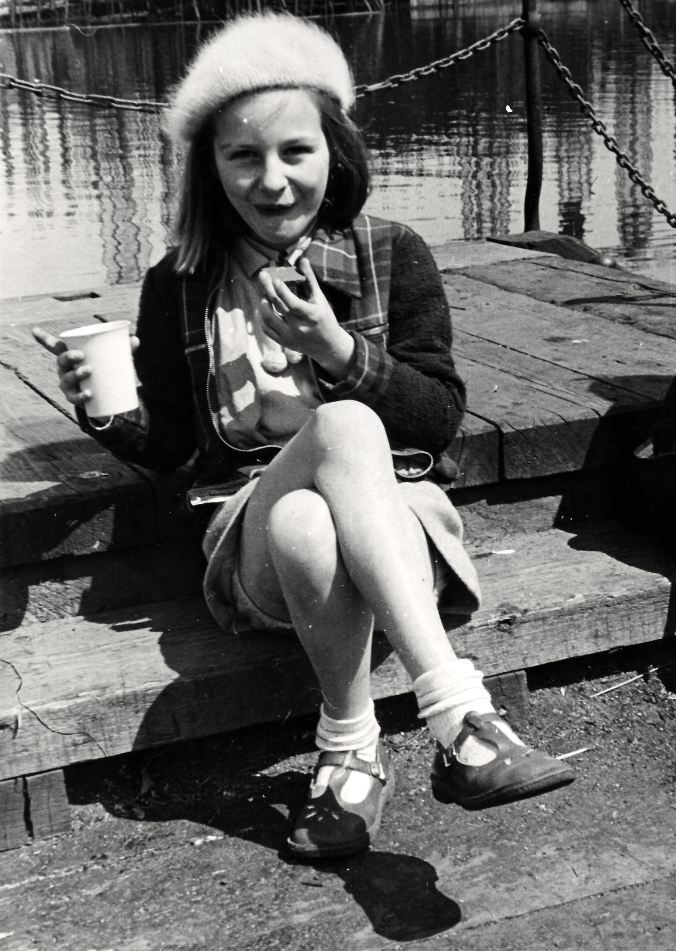 I bet there’s a few of you out there had a pair of Clark’s sandals like mine. A new pair every year in time for summer. And no comments about the knickers please! Remember everything was hand-made in those days so no doubt they were cut down from my granny’s old ones.